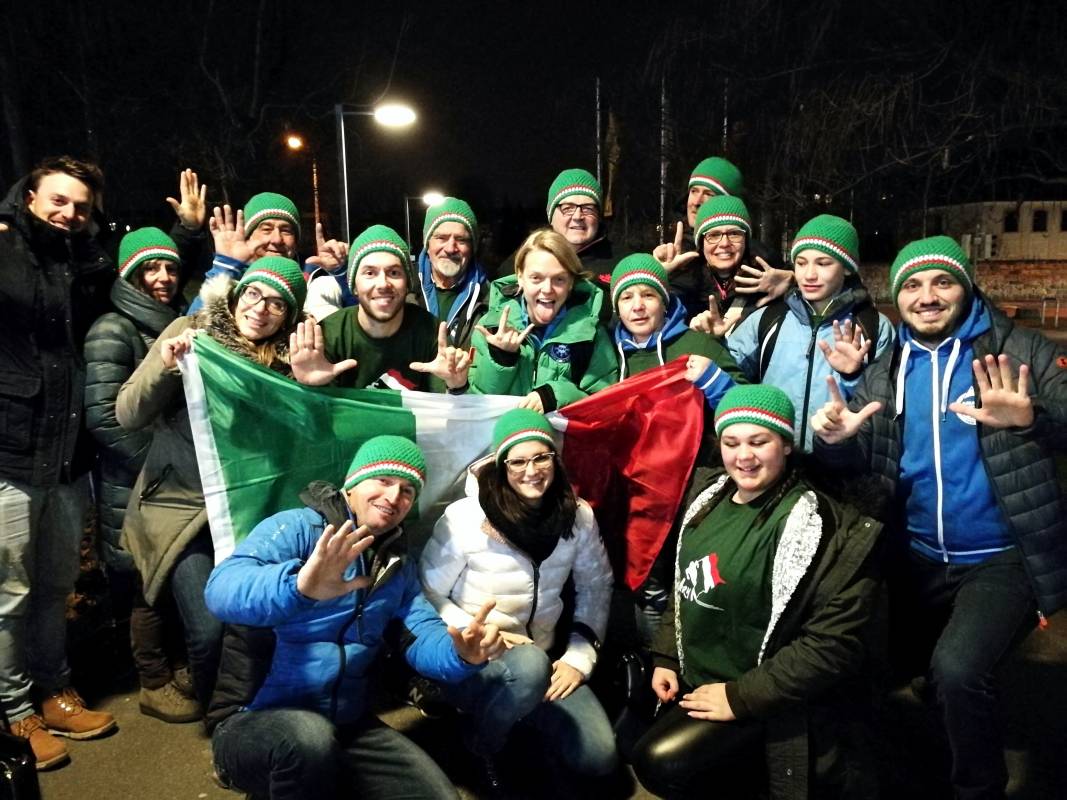 "I'll be there in five minutes", Mike lets us know via the Whatsapp group.
My watch shows 11.45 pm. An unusual time to leave home, even though it is Friday evening and the third workweek of the year is definitely over.
On board of a Nissan X-Trail rented a couple of hours ago,,five intrepid fans are ready for a long trip which will take them to Dresden in a bit more than ten hours.
900 kilometers in one go, across Switzerland, Austria and Germany, in order to be on time for the umptheenth appointment with history.
The record for numbers of European Championships won has so far been an exclusive of Bulgarian champion Evgenija Radanova, who has won seven continental championships between 2000 and 2007.
After winning her sixth title in Turin the year before, Arianna is only a short distance behind.
This continental appointment also represents an important test in view of the most important moment of this four year period: the Pyeongchang Winter Olympics are just behind the corner, in four weeks exactly.
A couple of stops, always with an eye on the speed limit, Ely’s smartphone spanning from Bob Marley to Ed Sheeran: at ten am we are at the IBIS Hotel in Dresden, where Arianna’s parents and around ten other friend-fans from Berbenno and Valtellina have been staying since Thursday.
A quick nap and off we go again, this time to the nearby ice arena which has hosted various World Cups and European Championships.

The EnergieVerbund Arena  may be a bit less suprising than what I’ve seen during our previous trips to the Netherlands, but it is still very respectable.
We take seats in the second lateral ring, wearing our green berets from Turin and the new t-shirt designed by Beatrice for the Olympics, while Arianna skates by with the Italian flag in her hand, the motto “WE4RY” at the front and the Fan Club’s logo at the back.
It begins with the 1500 m. Arianna qualifies easily for the final where she will compete with the Dutch ladies Schulzing and De Vries, the Russian Efremenkova, Hungarian Bacskai and teammate Martina Valcepina.
With 2 more laps to go Arianna tries to overtake the Russian, as Schulzing arrives from the outside: a contact and all three go down!
Martina takes advantage of the accident and wins race and European title in the 1500 metres.
Obviously disappointed Arianna comes in fourth, due also to the disqualification of Schulzing.
But the opportunity to redeem herself comes up with the 500 m race, Arianna’s "historical" distance. Quarters and semi-finals run smoothly; 4 in the finals: against Dutch Van Kherkhof, Russian Prosvirnova and the leader of the general classification Valcepina. Arianna, starting from third position, tries to make the first curve at the front, but remains behind her teammate, who, galvanized by the red helmet she’s been wearing for less than an hour, hits a historic double by winning the gold medal for this distance as well. Arianna, with her silver, regrets having "lost the thread" on the penultimate lap and is now a good 39 points behind Martina in the general classification. In the stands happiness about yet another European medal contrasts with the feeling that luck has not assisted Ary in these first two races, a feeling that is confirmed by the fall in the relay that affects the girls' access to the A final on the following day.

We return to the hotel with the impression that a lot can still happen on the second day of the competition. Ary will not be with us at dinner -  a clear sign of how much she wants to stay focused.
Dinner at Trattoria “La Piazzetta”, a beer in Neustadt and then we all go to bed early: the fatigue of the trip hits us!
We take advantage of the free morning to visit Dresden, with all of its attractions concentrated in the Altstadt, the old part of the city: the Zwinger, a splendid medieval fortress, a riverside walk along the Terrassenufer with a view of the river Elbe, the cathedral Frauenkirche.

But time is short and a tyrant and at 1 pm we are back at EnergieVerbund for the 1000 m quarters, the  distance least suitable for Arianna’s qualities. But she manages to qualify or the finals nevertheless, without  Martina, who fell during the semifinals.
The opportunity to make up leeway in the general classification is om her grasp and Ary faces a race all in attack: she leaves Schulzing no possibility to overtake and wins gold in the 1000! Our stadium section lets go to and rejoices noisily, Ary looks at us and punches the air in, her father Renato looks at me and asks me "how many points does she have now?"
She’s only six points behind Martina: if she finishes in front of her in the last and decisive race, the 3000 SuperFinal, she will have made good.
The minutes before the 3000 m race are packed with suspense: a unusual distance which the athletes do usually cover with their relay teammates. There are no specialists, the head counts probably more than the legs.

A first commotion during these 27 very long rounds comes when there are ten more to go and Dutch De Vries tries to overtake all rivals and fails. Arianna manages to keep a position at the head of the race with Prosvirnova and Schulzing competing for a third place in the general classification, while Martina remains at the back throughout the whole race.
We get closer to the rails in order to adrenalise the last rounds, yelling “Go Aryyyy” up to the sound of the last bell.
Second behind Prosvirnova.
Above all – seventh European gold!
Ary finally lets go, she looks at us and smiles while we sing “we are, we are, we are European champions!”. Renato looks at us and says “Seven”, with a slightly fazed expression on his face, while indicating the number with his big hands.

Then comes the presentation ceremony.
With Michele, Tommaso, Elisa and Arianna (a hononymy) we “invade” the German sector.
“OOOOOOOOOOOOOOOO……”
“Representing Italy. 5 times Olympic champion. Ladies and Gentlemen, Arianna Fontana!”
The Italian flag is being hoisted while the notes of Mameli’s hymn can be heard.
We sing and watch Ary while laying our right hand on the heart, she does the same and smiles at us.
We finish almost yelling the last line “siam pronti alla morte l’Italia chiamò!”

Ok, maybe we were not really ready to die for it, but we were ready for another trip. A trip through Europe, with someone who has written her name seven times in the history of her sports.
Seven times – seven wonders.
The seven wonders of Arianna.