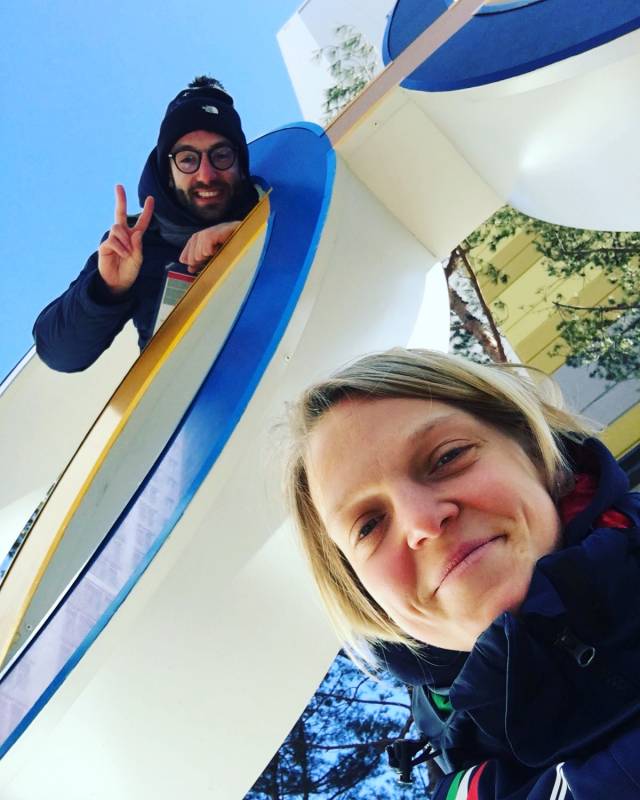 I was at the house of friends for a collective greeting before leaving, there were  seven or eight of us, and at a certain point the phone rang:
"Hi Ale, how's the forecast for the fourth Olympics?" – a friend from Milan asks.
"No mere forecast. I'm certain I’ll see Ary win gold. I’m going to see history in the making" – I reply firmly.
The phone call ends with a “that prophesies doom”, but I am sure about what I just said.

We leave the day after.
Two flights and a high-speed train-ride later I’m in Gangneung in the company of Mum Maria, Dad Renato and Uncle Michele. After we’ve found the apartment, the only thing we want to do is having dinner with Ary and Anthony – you may say that this sounds like an easy thing to accomplish. But when you are in a continent where no one speaks your language, even an easy thing turns into something almost impossible. But thanks to the generosity of a couple of young Coreans we manage to find and to embrace them and have at least a quick dinner together.

The Olympic Winter Games will be officially opened the day after and we leave for Pyeongchang for the opening cerimony, during which Ary as flag bearer of the Azzurri team waves the Italian tricolour in front of millions of spectators.
What an exciting afternoon: a crowded stadium, impeccable organisation, lots of shows and light works.
When we hear the speaker announce Italy and its athletes, we turn our gaze on Arianna: her expression emanates joy, pride in being “the first in line”but principally her desire to leave an indelible mark on these Olympic Games.
On the night before the 500 metre race I had a dream which so far I’ve revealed only to my mother: In this dream I saw my Nonno Livio smiling. His smile has accompanied me during those two weeks and I have this feeling that from up there he ensured that everything went into the right direction.
And then comes the day of the 500 metre race, Tuesday, 13 February 2018.
I knew that Ary would give herself entirely to make her dream come true – to get on the top step of the podium.
Tension is very high.
Quarters, semi-finals and than the final.
In Short Track emotions run very fast: in less than a minute thoughts, fears, moods change at every curve.
In the last lap Ary and the Corean runner come in very closely, at the arrival the distance between them is non-existent, but in my heart I never doubt that Ary is first.
And the photocell confirms: it’s GOLD, it’s finally GOLD!
Me and Uncle are in a different part of the stadium from Mum and Dad: getting together, embracing, be moved together watching Ary getting on that step of the podium, is one of the most thrilling moments of my life.
The evening continues with due celebrations: a very good local beer with Ary and Anthony, while the phone never stops ringing.
The next day during the presentation of the medals temperatures are very low, the cold is all pervading. But with emotions such as these, nothing keeps you from living a moment like this to its fullest: I take my cell phone, I yell and sing our national anthem at the top of my voice and end with the outcry “Grande Ary” which I am later told was broadcasted worldwide!

But it does not end here – do you remember how I told my friend “I’m going to see history in the making”?
One medal alone, even if made of the most precious metal, is not enough.
The day of the 1500 metre race: Ary gets into the final, a very difficult one, as the athletes compete fiercely and in the 1500 metre race tactics are fundamental, you have to pace yourself and control your energies.
No medals on that day, but the bases are laid for what will happen during the last two racing days.
What happened?
Silver medal for the girls in relay and bronze in the 1000 metre, the distance Anthony favours and the only one in which Ary had not yet won an Olympic medal.
The final booty is “gold, silver and bronze”: added to the five already in the safe this makes eight Olympic medals!

We can thus return home to remind those who wavered and did not believe in her, that only real champions leave an indelible mark on history.
From your big  brother, HEARTFELT THANKS, ARY.